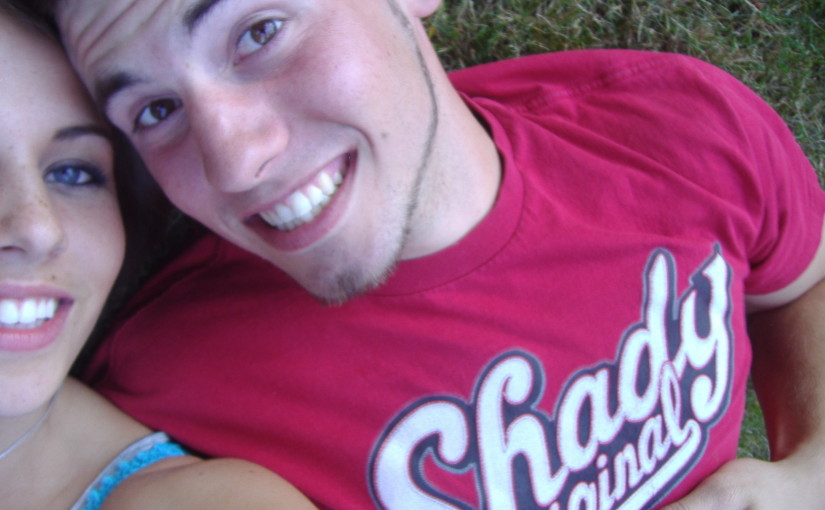 I haven’t really been around for very long at all, so I don’t claim to be an expert by any means, but I’ve experienced a thing or two…

Last night, I attended a wedding of a dear family friend. Two beautiful people joined together by law and by God. Before the ceremony began, thoughts of my own wedding day swirled through my mind.

When we were dating, Nick and I could make anything *feel* magical. But, it wasn’t because we were doing anything particularly special. It was because we APPRECIATED the time we spent with each other, and realized what a blessing the other was. I remember the day the picture above was taken. We simply went to a park after work. We took pictures and laid in the grass and talked about our childhood, our lives, our futures. Nothing was particularly romantic, but it felt romantic as ever. It was ALL mindset.

But, feelings can change. Feelings are fickle.

And, if we aren’t careful, negative feelings CAN rot our most precious gifts….

Instead of simply realizing the blessing of *being together,* we focused on what we wanted next. A bigger house, nicer clothes, more expensive cars…

Suddenly instead of the home-made romance I had cherished before, I came to a place where I had decided I  NEEDED more.

I fell for the lie that materialistic things *equal* worth (and, even, your marriage’s worth). I lived in a place where exotic vacations, expensive jewelry, and fancy surprise date nights with red-carpet-worthy dresses were a sure sign of the level of adoration that your husband actually held for you. (Or, so I thought.)

It was horrible. UGLY, really. I don’t like sharing the rather hideous parts of myself (who does?) and I’m ashamed for some of these things I’m about to share. But, it’s the truth… And, though I don’t believe sharing my story makes me any less guilty (only God’s grace does that), I do believe that sharing my story may help someone else.

A week of particularly petty fights had lead up to our third anniversary. Nick had acted like he hadn’t planned anything for our anniversary, and I thought that he possibly was planning some sort of surprise. That there was some kind of plan. Along came our anniversary, a weekday… I went to work and didn’t get any flowers delivered. I came home and didn’t have a card waiting for me. Nick arrived home and asked where I wanted to go to dinner. He thought we should go out but didn’t want to get too far away because he had to get up early for work the next day. So, after much argument, we settled on a small local restaurant in Monroe. Sure, it was the nicest one in town, but Monroe was tiny and this place welcomed construction workers after a long day on shift. I dressed up as best I could, and without a second glance from Nick, we trekked out to the restaurant. The dinner went by uneventfully, like any other night, other than the fact that I spilled my drink completely into my lap.

Ripping disappointment seared through my heart and I felt sorely unappreciated. It hurt. And, I sulked all the way home and when we pulled in the driveway, I ran upstairs and locked myself in my walk-in closet (girl didn’t know how good she had it). Nick was apologetic but also slightly confused. After all, he had asked me multiple times that week what I wanted to do. I had hinted that he should surprise but never came right out and said it. And, let’s give the guy a break, he was 24 years old and pretty new at this whole marriage thing.

When Nick walked away, done with talking through a solid wood door, I rolled into the fetal position and cried out to God. I wondered allowed. “God, did I marry the wrong person? Does he even love me anymore?”

In hindsight, I see so much that was wrong in my thinking. I had put all the pressure on him and hadn’t taken any responsibility for making *him* feel loved either. No, he hadn’t surprised me with much, but all I had gotten him was a card at the grocery story on my weekly shopping trip and expected him to put together everything else. I wasn’t clear with him on what I wanted or expected and, honestly, I hadn’t tried hard at all to appreciate him for the last week, let alone the last few months.

Fast forward 5 weeks later, I’m sobbing in Nick’s arms on our living room couch. He’s just been diagnosed with terminal cancer and I realize that my entire world is being threatened.

So, Did You Marry The Right Person Or Not?

Let me tell you something…. If you have ever thought “Did I marry the right person?” or you are thinking it now…

HOLDING ON to your spouse during the trying times and the questions is what marriage is supposed to be about. Better or worse. Sickness or health. Fancy cars or beaters… You are in this TOGETHER.

When you said your vows, your spouse BECAME God’s will for your life.

Marriage is a sacrifice. You won’t often get what you want. You may even have days or weeks or months where you are struggling for a reason to stay. But, if you do, when you do… I can tell you that it will make all the difference in your life and in your husband’s or wife’s.

A BEGINNING AND AN END

In a short five years, I experienced the BEGINNING and the END of a marriage. We had ups and downs, like most people do…. though I would say that we had many many more joys that difficulties.

My marriage started after I stood on a stage, in front of my family and friends and pledged my life and love to the most wonderful man I had ever known. It started when, with my best friend’s hand in mine and a smile spread wide across my face, we walked down the aisle announced as Mr. and Mrs. Nick Magnotti. We were so excited for the life to come. The decades we would surely have together.

My marriage ended five years later when I laid down on my husband’s hospice bed in the master bedroom we had shared. His fragile body had barely made an imprint on the mattress, but alone and curled up, I tried to fit into it. I got as small as I physically possibly could, trying to disappear. Noises emanated from my soul that I had never heard before. The pain burned white-hot in the middle of my being. The funeral company had taken my husband away and nothing of him at all was left.

The beginning and the end. So very different. SO. MUCH. JOY. and then SO. MUCH. PAIN.

I may have given up fancy trips and sparkly jewelry by marrying a sweetheart of a mechanic, but my GREATEST blessing was giving up my everything to care for that man in his last days.

On his worst cancer days… When I had to wash him, feed him, turn him, help him with his medications, clean up after him… The days where I didn’t take a second for myself, those days I saw MORE of what it was like to be in a REAL MARRIAGE with REAL LOVE than I could have ever seen on a trip to the Caribbean.

So, whether you are sacrificing a *little* of yourself each day, or giving up your everything for your spouse, please see it as the blessing that it is. Recognize that our time together is not promised. That YOU ARE VERY MUCH meant for your spouse. And, that you never know what God’s plan is for your life.

Your spouse may act like they don’t need you today, but maybe there’s a day coming when their life, their soul, will depend on you.

And, maybe today, it feels like you would be better off without your spouse, but if you go, I can assure you that you’ll have days you wished you had someone.

Hold up your end of the bargain.

LOVE with ALL that you have, even if it seems like the other person isn’t trying.

It’s an amazing, AMAZING privilege just to have another person walking by your side in this crazy lonely world. Try not to forget it.<3

16 thoughts on “Think You Married the Wrong Person?”