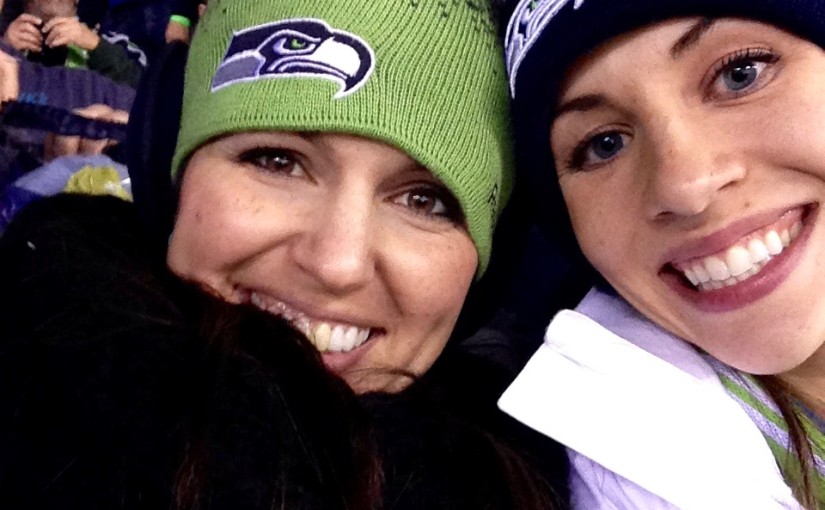 You guys remember how a few years back I got to go to the Super Bowl? No? Well, I freaking do! I was totally GONNA write a blog post telling you guys all about the experience, but life was so crazy busy at the time.

Nick, my late husband, had passed away January 7th so I was knee deep in sympathy cards, waist deep in paperwork, and neck deep in a puddle of my own tears. Our daughter was just 9 months old. She was just beginning to walk and starting to find ways to get into trouble (imagine a baby who is suddenly able to open all the cabinets in your home, purposefully step on the dogs tail, and falls down every single time her toe hits a grout line on the tile floor… Chaos? Exactly. Moms of babies/toddlers, you hear me. Total. Complete. Chaos.).

So, there I am, trudging along, a 27 year old widow (The heck?! Those last four words will NEVER look right to me). I’m trying to keep my smiles up for my little girl, my head up for my sanity, wondering how I’ll ever trust God again, and I get a phone call.

“Alyssa! The pastor of our church was given Super Bowl tickets. They don’t know who they are from, but the person who dropped them off asked that they be given to somebody who needs some joy in their life. Pastor Mike saw your blog posts and knows about Nick. Anyway, he picked YOU! Two tickets to the Super Bowl, airfare to New York, and a hotel. What do you think?”

At first, it seemed like the smartest answer would be “NO WAY.” And, it probably would have been. I was suddenly a single mom. Who was I to think about bringing my sweet little baby girl girl to NYC? I was super busy… But the more I thought about it, I knew I couldn’t pass up the opportunity. I knew that Nick was looking down on me and how dang disappointed he would be if I said No.

Right then and there, I made a pact with myself. I would never pass up another opportunity just because I was scared. No. More. Fear.

Fear had ruled far too much of my life. Nick and I hadn’t done that many awesome and exciting things in our marriage. Mainly, because we were afraid (okay, okay… it was mostly me). We were afraid we would miss out on too much work, that we might not have the money, that we might get lost in a foreign country (valid fear tho: Jay and I got lost in Paris. True Story.) the list goes on and on…

We didn’t start REALLY taking chances until Nick was diagnosed with Stage 4 cancer. What a wake up call, right?! After that, especially once he was given a bill of clean health (which only ended up lasting 10 months), we took EVERY SINGLE opportunity we could to do the things we wanted to do. We went on a vacation (I swear that I hardly knew what that word meant before cancer) to Hawaii. We got pregnant (enter: Baby Girl Magnotti). We spent more time together. And, we spent QUALITY time together (imagine that)!

The trip was amazing, one of a lifetime and I don’t regret one second of it! One of my sweet friends, Cat, came with me to the big game and stood by my side to cheer the Hawks on. Austyn came along and my dad too for extra help!

A local news station covered the story. We did an interview here in Seattle before the game and then one at Columbus Circle in NYC. When those videos hit the news channel, there was a lot of love…. But, there were also some nasty comments.

One commenter said something like, “She must not have loved her husband if she is going to the Super Bowl just one month after he died.”

The answer that came straight to mind was “I must love my husband SO MUCH to go to the Super Bowl right after he’s died.”

Doing things AFTER loss isn’t disrespectful. Doing things might be hard though. You should NOT feel guilty and don’t let people make you feel that way. You very well might be scared, but please don’t let that hold you back.

Whether you’ve lost someone or not… remember that LIFE is for LIVING. Stop being afraid. Put on your BRAVE PANTS. Live every single day… on purpose!

Read the crazy story BEHIND the tickets at the bottom. You’ll never guess who the “mystery person” was who gave their SUPER BOWL TICKETS to the church!

SO….  WHO GAVE THE TICKETS TO THE CHURCH? >>> The guy who gave the tickets to Overlake Christian Church contacted me when he saw the story on the news. The reason he had dropped two perfectly good Super Bowl tickets at the front desk of the church that day, just a few weeks before the game, was because he knew he would need to stay home. You see, his father was sick with cancer and he wanted to be there for him. As it turns out, his father passed away the very day after the big game.

PS>>> Mike Howerton has become a great resource for me for my upcoming book! He’s an author himself and has offered great advice and amazing resources. Seriously. God sets things up in some pretty awesome, amazing ways, don’t you think?!

One thought on “Put Your Brave Pants On”